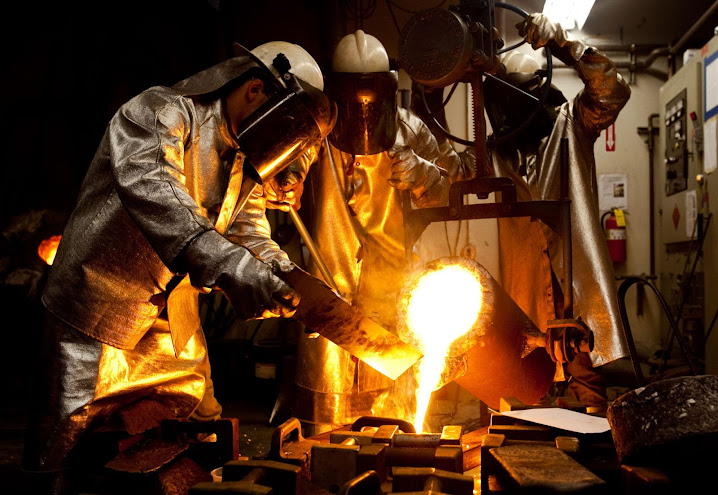 Material properties are an important piece of information that engineers rely on when selecting the best material for a design solution. For instance in the 1988 Challenger space shuttle disaster, an o-ring seal failed, causing the death of seven astronauts. A misunderstanding about the limits of a material led to this accident.

Engineers often deal with the design of useful products that require materials with certain characteristics or properties. Complexity is increased when we consider that new materials are constantly being developed, and their application in new products drives economic growth. Engineers, therefore, must know how to make sense of the multitude of different materials available. When existing materials don’t provide the desired properties, engineers create new materials called synthetics. Synthetic materials allow engineers to be extremely innovative when designing solutions to society’s needs.

Sometimes the focus isn’t on the creation of a new material, but on the creation of advanced recycling technology. Nike is one of several corporations assisting engineers with innovative recycling technology. For instance, Nike has worked with engineers to develop a method of recycling athletic shoes. The recycled shoes are ground up and used for the production of basketball courts, tracks, playgrounds, etc.

This lesson is designed to provide students with an opportunity to investigate the basic categories and properties of materials. Students will discover how products are made and how they are recycled once they are no longer useful.

K1 – Identify and differentiate among the various categories of engineering materials.

K2 – List material properties that are important to design including mechanical, chemical, electrical, and magnetic. 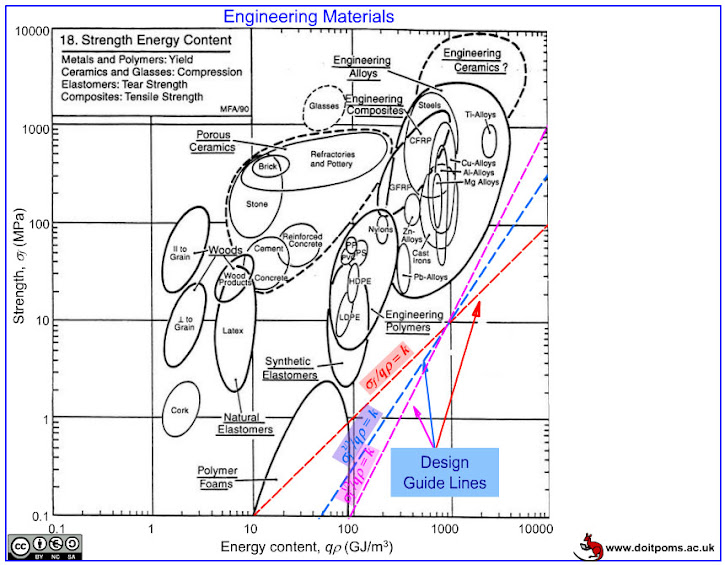 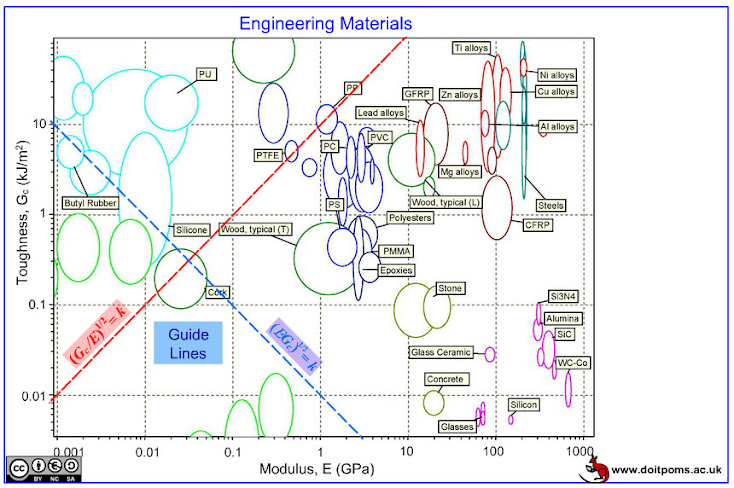 The graphs below list a large number of common engineering materials. The materials are arranged by useful properties, like strength, which you will learn more about in the next unit, 2.3 Material Testing. Spend a few minutes finding recognizable materials in these two graphs. 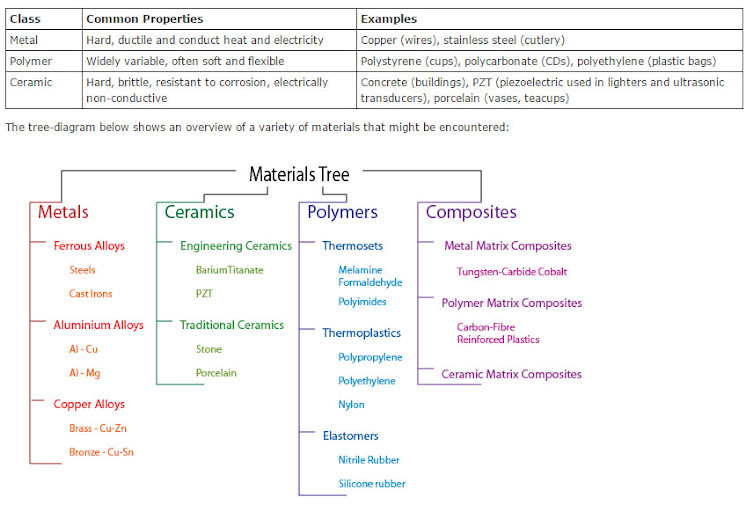 Materials can be categorized in various ways, but they are typically grouped into: Metals, Ceramics, Polymers and Composites. A fifth category might be Wood. Note that Glass falls under Ceramics. The table below lists Concrete as a Ceramic, but it is actually a Ceramic Matrix Composite.

A polymer (poly, meaning "many") is a large molecule made up of repeated subunits (called monomers). These long snakelike molecules get tangled with each other and, in great numbers, form a piece of material large enough to hold in your hand. Imagine millions of tiny, thin snakes so tangled together that, without a microscope, it looks to be a large solid block of material. When you pull on the material, you forcibly untangle some of the snakes (molecules), and the material breaks apart. Think of pulling taffy apart. To strengthen this material, various other molecules are added to the mix, and these serve to bind the large molecules together. It's as if handcuffs are placed on the snakes, one end on one snake and the other end on a different snake. They only allow the snakes to move a very tiny amount, relative to one another. Enough handcuffs -- actually, these special molecules are called crosslinks -- and the material becomes quite stiff.

Thermoplastics are plastics (and look and feel as such) without the crosslinks, They typically are strong enough, despite having no crosslinks, that you can't pull a thick piece apart. However, if you heat a thermoplastic, it melts and becomes a viscous liquid. Then you can pull it apart or reshape it. Crosslinks would have prevented the melting, but again, thermoplastics don't have any crosslinks.

Elastomers are a third category of polymers. They contain a relatively small degree of cross-linking, which allows them to be stretched to some extent. When the stretching force is removed, however, they spring back to their original shape. (When you stop pulling on them, the snakes resume their coiled up positions.) Think elastic; think of a rubber band.

Our society is utterly dependent on polymers. Think of how many items you use on a daily basis that are at least partially made of plastic or rubber. 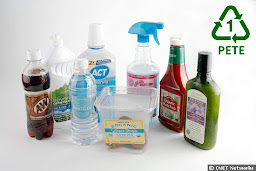 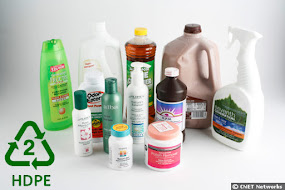 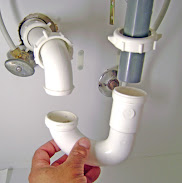 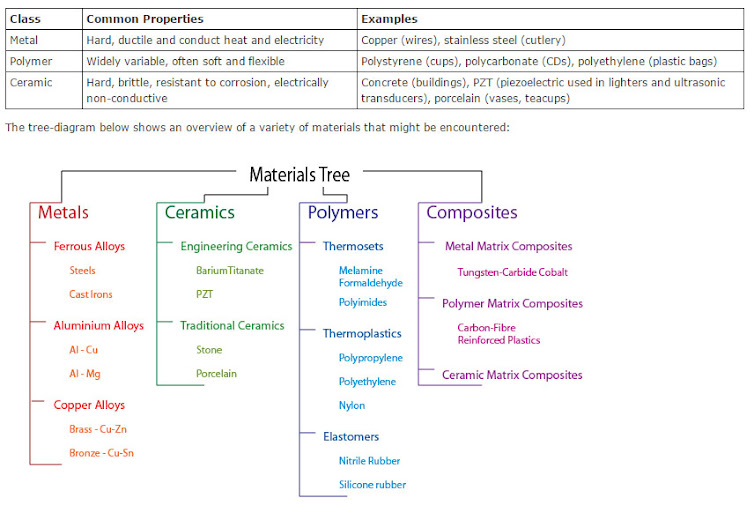 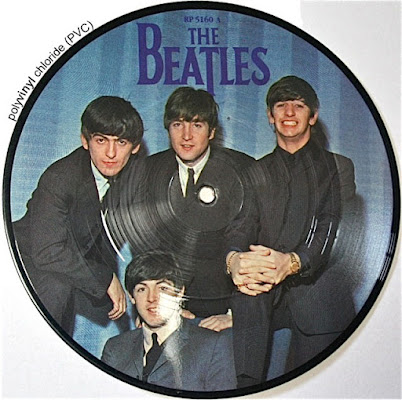 Ceramics are nonmetallic materials of nonbiological origin (i.e. they are inorganic). Ceramics are typically made from clays and other minerals from the earth (e.g. silicon dioxide, aka silica). Most are crystalline, with the notable exception of the various glasses.

Humans came to make and use ceramics thousands of years before they discovered copper, the discovery that ended the Stone Age around 5000 BC. The earliest ceramics were made of fired clay. Glasses, made mainly from silica -- a handful of sand is mostly silica -- came much later, perhaps around 1500 BC. Interestingly, humans' first exposure to glass was likely finding fulgurites in the desert. Fulgurites are glass "staffs" formed when lightning strikes and melts desert sand.

Modern-day engineering ceramics include PZT (Lead Zirconium Titanate), which is a piezoelectric, a material that develops a voltage when it is stressed. 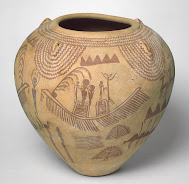 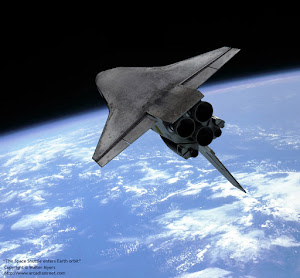 the thermal tiles covering the shuttle are 90% air & 10% silica

Why Are Tattoos Permanent? 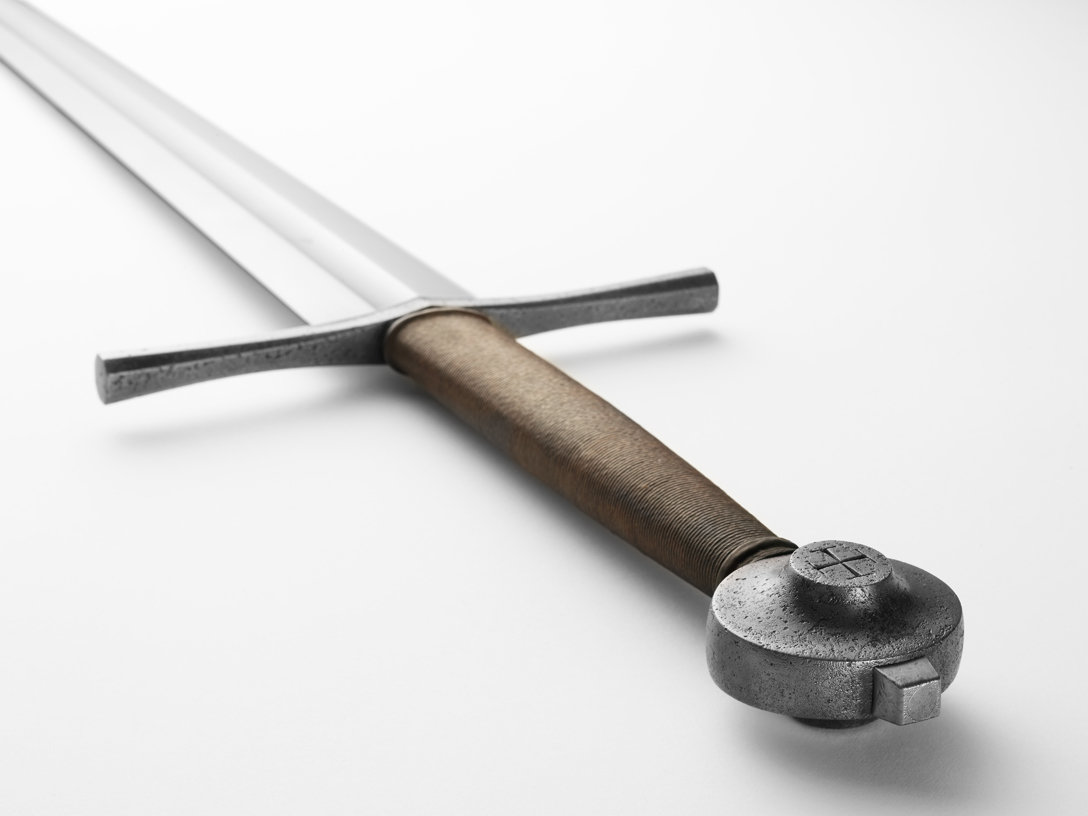 Metal alloys (and to a lesser extent, pure metals) are essential

to modern life. (An alloy is a metal combined with another substance that makes it stronger, harder or better in some way.)

Few pure metals are found on Earth: just gold, copper and bit of silver and iron (with the iron from meteoric rocks). All other metals exist as compounds in structures called minerals. A mineral
which contains a high enough percentage of a metal
for economic extraction is called a metal ore.

Steel swords were rare and expensive in the early Middle Ages. Swordsmiths often produced high-quality steel only by accident, and more often they produced brittle steel that would snap in battle. Improved technology and skill among swordsmiths led to "affordable" swords by the Fourteenth Century. The following century saw the development of the much superior samurai sword of Japan.

Steel is currently the most widely used metal material on Earth. It is used extensively in construction, vehicles, household appliances and countless other areas. 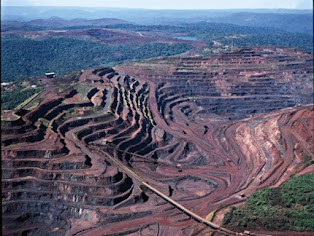 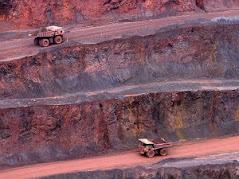 Carajás Mine, the world's largest iron ore mine, located in Brazil. Carajás is rich not only in iron ore but also ores for manganese, copper, tin, aluminium and even gold.

How Stainless Steel is Made - video (How It's Made) 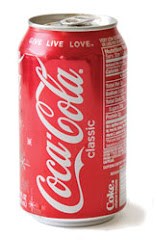 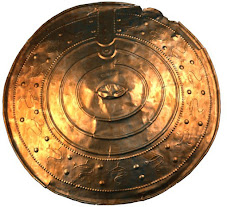 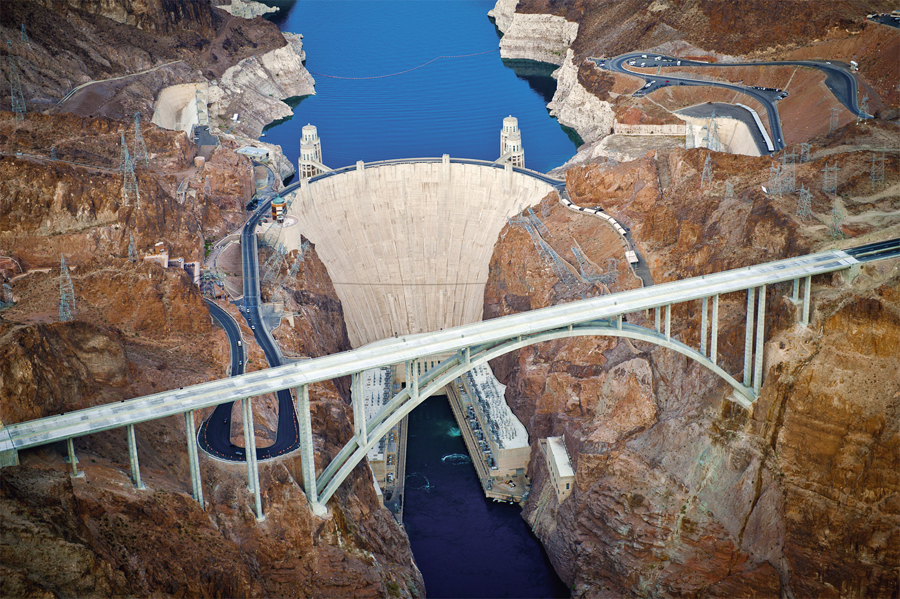 Composites are materials formed from a mixture of two or more components to produce a material with properties or characteristics superior to those of the individual materials.

Concrete is, by far, the most important composite material in the world.  According to the World Business Council for Sustainable Development, "[C]oncrete is in fact the most used man-made material in the world, with nearly three tons used annually for each man, woman and child. Twice as much concrete is used around the world than the total of all other building materials, including wood, steel, plastic and aluminium. None of these other materials can replace concrete in terms of effectiveness, price and performance for most purposes."

Concrete is the second most consumed material in the world after water.

The Hoover Dam (pictured both above and below) was the largest concrete structure ever built when the Dam was constructed on the Colorado River in the 1930's. Some 6.6 million tons of concrete were poured and cooled. 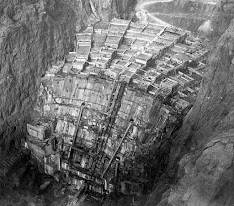 The Making of the Hoover Dam - video (History Channel)

How can concrete heal its own cracks? Find out here! 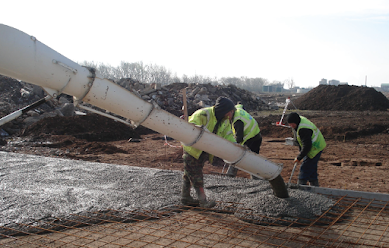 Why are steel reinforcing bars (rebar) placed inside most pieces of concrete?

Concrete is good at withstanding large compressive loads, but it is weak when placed in tension. Steel handles tension well. When placed within concrete, steel passes its strength in tension to the concrete structure. Prior to the introduction of steel-reinforced concrete in the late 1800's, nearly all concrete structures were built to withstand only compression.

While reinforced concrete dominates worldwide construction, it doesn't work so well for making tennis rackets or bicycle frames. These items used to be made from wood, steel and aluminum; nowadays, they are more likely to be made at least partially from carbon fiber.

Carbon fiber-reinforced polymer (CFRP), or carbon fiber for short, is a composite material comprised of a polymer matrix (often, epoxy) with reinforcing carbon fibers. The material has an exceptionally high strength-to-weight ratio. High cost limits its application, but this appears to be changing.

Featuring excellent mechanical, thermal, electrical and magnetic properties, graphene (a form of carbon and itself not a composite) enjoys broad prospects in such fields as high-performance electronic devices, composite materials, sensors and energy storage.

Graphene is the strongest material ever tested. 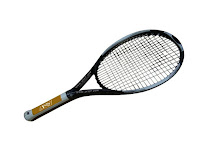 A carbon filament next to a human hair. (The hair is the larger of the two.) 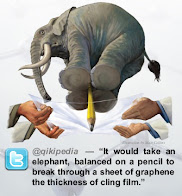 Properties to Consider When Choosing a Material:

You can find a collection of videos showing many of these manufacturing processes on the website or YouTube channel of the SME (formerly Society of Manufacturing Engineers).

Here are just a few resources on some of the manufacturing techniques above.

Browse the How It's Made Library 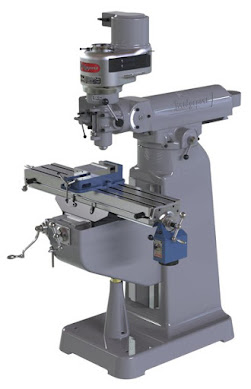 Milling machines are used to cut and shape relatively small piece of metal or other materials. The piece of material is fixed in a vise and moved against a spinning blade (a "rotary cutter", pictured below) to shave off small sections of the material. For small jobs, the operator may move the vise/material around with hand cranks. Greater precision is obtained by using a CNC (computer numerical control) machine, in which a computer guides the material or cutter.

There are many different types of mills, varying in their size, configuration (e.g. vertical or horizontal layout), and method of control. The mill at left is a hand-operated vertical mill. You'd likely find one of these in a machine shop.

Here's a video of a CNC machine in use. This machine looks quite different than the hand-operated mill shown above. 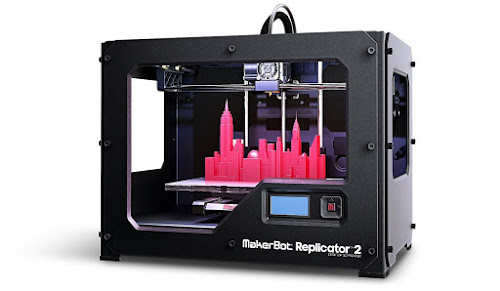 Looking toward the future... 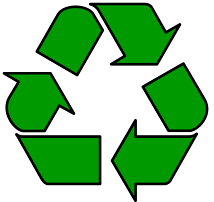 Recycling of Steel - video (How It's Made) 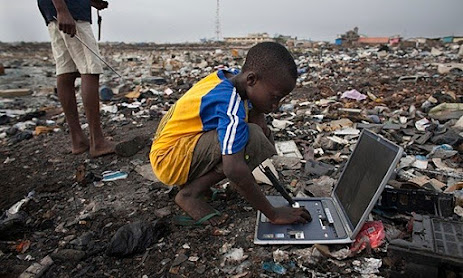 What's in your Iphone? 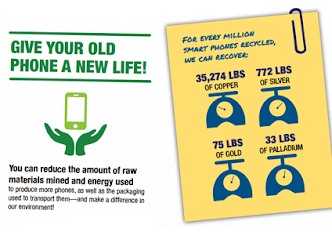 Read this article for an overview on Materials Science and choosing the right material for a job.